Matthew 25 appears to sort people into sheep and goats based on their works. But aren’t we saved by grace alone?

Continuing this week with my reflections on prayer:

Prayer is a really important part of our work to end human trafficking.  We have access to God, and God knows the best way to succeed in ending slavery forever.  We can ask Him, and He’ll help us.  So we should ask.  Success will come so much sooner!

Throughout my baseball career, God has continually increased my role in Christian social justice projects. Due to my participation in hunger and abolition initiatives, and after I saw the joy expressed by Ugandan children over clean, clear water, I read about the judgment of the sheep and the goats in Matthew 25 with fresh eyes. And as I told you last time, this opened me anew to the simple truth of the Gospel. When you accept Christ as your Lord and Savior, and you make that dedication to love the Lord God with all your heart, soul, mind, and strength, then the Spirit of God becomes alive in you.

That’s when the aroma of Christ will flow out of you. END_OF_DOCUMENT_TOKEN_TO_BE_REPLACED

In a previous post, I told you how I got into food initiatives, and how satisfying it is to give the hungry something to eat. It was so fulfilling that I started researching poverty and hunger closely. And then everywhere I looked, I saw a dreadful pattern. END_OF_DOCUMENT_TOKEN_TO_BE_REPLACED

When I first started learning about the love-your-neighbor-as-yourself mentality, my spirit grabbed it. I mean, I was really excited. I said, “This is it!”

But then when God started teaching me about poverty, I really started digging. I’ve been researching poverty ever since. Poverty is a whole world of interconnected causes and consequences. The more I learned, the more I understood poverty’s complications, and the more I understood how people get trapped in it. And I could feel myself shifting.

As iron sharpens iron,
so one person sharpens another. Proverbs 27:17

Sometimes I miss just hanging out and talking with people that want to challenge me. I like a good, tough discussion about different ways of thinking. I like having my moral code challenged, or being asked to explain a piece of reasoning or why I hold a certain opinion. Even in baseball, where guys are really competitive, I’m seeing the level of discussion drop off. Now a guy will just as soon say, “Well, that’s cool,” and that’s it. That’s the end of the conversation.

“That’s cool”? That’s the state of dialogue? What about saying, “I hear you, but what about this perspective?” What happened to getting into strange, fun discussions about different viewpoints? Most people don’t seem to want to deal with that. They just want to say, “That’s cool. I don’t agree, but that’s cool.”

Well if you disagree, then obviously it’s not cool. So why do you say it is? I think there’s an idea growing out there that truth is relative. People have decided, “Well, you know, you can believe that. That’s your own belief. You believe your way, and I’ll believe my way.” There’s just no “iron sharpening iron” going on. 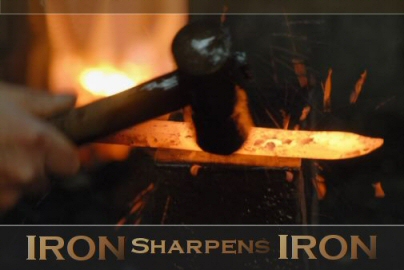 If you think I’m wrong, I have no problem with you challenging me. I wish you would! Don’t say, “That’s cool. To each their own.” No, no. If we did that with everybody, we’d have chaos. And anyway we don’t do that. When some guy kills some other guy on the street, we don’t say, “I probably wouldn’t have done that, but, whatever, it’s cool.” It’s not cool! When that happens, we’re challenging it. We’re going to put that guy before a court. We’re going to tell him why we think he’s wrong. And we’re going to have to put him somewhere where he can’t do it again!

That’s an extreme example, but in normal everyday discourse, most people don’t want to be argumentative. And that’s part of why justice is not always being served in this world. There are literally people out there that see injustice and say, “Hey, not my problem. Whatever. I mean, you gotta do what you gotta do.” Well, no, you don’t!

But we’re afraid of conflict. The people that stand up to injustice, right now, should be considered heroes. The staff of Not For Sale are heroic in their endeavors. So is the International Justice Mission. There are a lot of different agencies and organizations that are trying to stop slavery. They may or may not be afraid, but they stand up.

The problem is, they comprise a small group compared to the numbers of people that are now finding out about human trafficking and still go to bed at night saying, “That’s cool, good for them for fighting,” and then move on. It’s going to take a whole society to finish slavery once and for all. Back in the day when there was a social movement, for abolition or civil rights or women’s right to vote, that movement succeeded when a whole society revolted. We didn’t get better as a country because people said, “Well, to each their own, that’s cool, you do your thing, good luck with that.” We got better because we said no to injustice.

We’re losing that. Most people now are afraid of controversy, and I think that’s unhealthy. In the spiritual world and in the common sense world, I think that you have to be okay with conflict. There has to be an iron-sharpening-iron effect.

Maybe we don’t love people the way we should love them, because we want to change them. We want that so badly. But we can’t change people! Only the Spirit of God can do that. When we try to change people, all we do is push them away from God.

Unfortunately, there’s a lot of that in the church. Sometimes people get around Christians, and they feel a kind of guilt trip. Or they feel like they’re just being looked down on in disgust. They feel that way because they are always being told that what they’re doing is wrong. That has to change! END_OF_DOCUMENT_TOKEN_TO_BE_REPLACED

Become a part of Generation Alive

Click image to see how you can join the movement